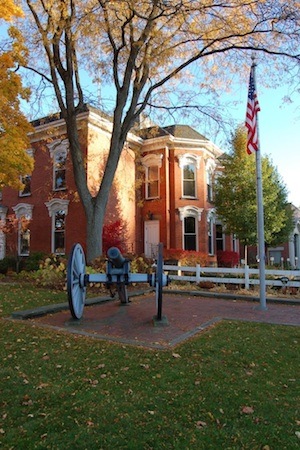 The organized settlement of Chagrin Falls began in 1833 as part of the Connecticut Western Reserve.  The topography of the area and the powerful Chagrin River dictated the development of Chagrin Falls as an industrial and commercial center.  The first families came from Massachusetts and included craftsmen, mechanics and carpenters whose skills would build a new village.  By 1842, Chagrin River power supported nine mills including saw mills, flouring mills, foundries, an axe factory, a paper mill, woolen mills, a woodenware factory and a shoe peg factory.  In 1844, Chagrin Falls was incorporated as a Village.  A sturdy settlement was established and a commercial center grew, serving the basic needs of villagers and surrounding farming communities.

Village houses and buildings have changed through time from modest early Greek Revivals to the prominent Italianate architecture of the 1870s, the Queen Anne homes of the 1890s and the practical bungalows of the 20th century.  Today, Chagrin Falls residents are stewards to a livable, walkable and architecturally intriguing historic village with a natural waterfall and dam located along the Chagrin River in the center of town.  The authentic history and village lifestyle that define Chagrin Falls are a source of community pride and a draw to visitors from around the world.

Township Hall at 83 N. Main Street welcomes visitors to Chagrin Falls. The Your HomeTown visitors desk is open from 11 AM to 3 PM.

In 1848 in what is now known as Chagrin Falls, Aristarchus Champion built a brick one story Greek Revival style building to be used as a public library.  In 1864, the Chagrin Falls Township Trustees bought the Library Hall and converted it into the Township Hall and the building was remodeled into a two story Italianate style structure in 1875.  Henry Church, Jr., who was the Chagrin Falls blacksmith, created the weather vane that still resides on top of the roof today.

The north wing was used as the town jail, and the second story was called the “Opera House” and used for plays, lectures and recitals.  The Chagrin Valley Little Theater often used the Opera House for its productions until a fire destroyed the Township Hall in December of 1943.  After the fire, Township Hall was restored as a one story Colonial Revival building and in 1975 it was listed on the National Register of Historic Places.